Today I am running 3 miles, not a long distance, but this is the final week of tapering for what would be the Casper Marathon on Sunday, June 7th.  I am sure it comes as no surprise to anyone that the Casper Marathon was cancelled, a victim of COVID-19.  As a member of three online running communities, it was a daily event to read posts from runners announcing that the next race they were signed up for was just cancelled.  If Cheyenne Frontier Days is the Daddy of ‘em all in regard to outdoor rodeos, then the Boston Marathon is the Daddy of marathons, and the Boston Marathon was recently cancelled for the first time in history (although now apparently it will be held as a virtual event in September).

I thought about continuing my marathon training routine and running 26.2 miles on Sunday, but while I would have the mileage, it wouldn’t be the same.  Looking back at my second blog post, I said about my first 5K, “and I learned what I really loved about running…. being around other runners.  The atmosphere for that run was more like a carnival and I loved it.”  Without the packet pickup, getting my running clothes/gear organized, attaching the bib, the comradery of the other runners gathered at the Casper Events Center early on Sunday morning, stretching, watching everyone’s pre-race routine, using the restrooms (once, twice…..maybe a third time) before gathering at the starting line, the countdown, the starting gun, and pressing the start button on my Garmin watch as I begin, it just wouldn’t feel right.  So, I have transferred my training calendar over to 2021, all geared up for June 6th, the date of the 2021 Casper Marathon.  For everyone, I hope you stay healthy.  For the runners, I hope to see you at the start line one day soon!

I’m a fair-weather runner.  I know a lot of people who face the challenge of cold, wind, icy conditions and persevere.  Not me, my goal is to run the distance, not necessarily to add to that challenge.  I’m one of those weird people who doesn’t mind running inside on a treadmill.  I have a job (Airport Director) that is anything but monotonous, so a little bit of monotony isn’t bad.  However, running inside took a different twist this week.  Nobody likes getting sick, but I’m not worried about getting the coronavirus and getting sick myself…I’m very worried about getting sick and passing it along to my wife.  As I’ve blogged earlier, she had a stem cell transplant five years ago and a heart transplant 1½ years ago, so picture a 5-year-old immune system that is being suppressed and you can understand why.  So, I’m re-thinking running outside and skipping the comfort of the indoors (and proximity to others).  We’ll see.

So last time I blogged I was ready to be starting my training program, and today I finished week four.  The training has so far been good.  I had previously said that I’m reading and following The Non-Runner’s Marathon Trainer.  The authors of the training guide began teaching a marathon class at the University of Northern Iowa in 1985.  At the end of the course, the students participated in the Drake Relays Marathon in Des Moines, Iowa.  Due to the popularity of the class, the idea of the book was born.  The training program only requires running 4 days per week.  That may not seem like a lot of running compared to other training programs, but the goal of the program is to prepare first-time marathoners to finish, and that is my goal, at age 55, to finish.  And the authors have a pretty good success record.  My runs are Tuesdays, Thursdays, Saturdays, and my long run on Sunday.  Here is what it has looked like so far: 3, 4, 3, and 5 miles week one; 3, 4, 3, and 6 miles week two; 3, 4, 3 (miss), and 7 miles week three; and 3, 4, 3, and 8 miles week four.  The first three runs of the week are a bit shorter than what I typically run, so not much problem there.  I could have started at longer distances, but my goal is to finish and follow the program exactly, which brings up the miss.  I missed running one day, my wife’s birthday.  I should have ran before we went out to dinner, and didn’t run after.  I planned to run the next morning (Friday) before work but was tired, and the same thing that evening.  While accomplishing 15 out of 16 runs may sound good, I need to be better disciplined, particularly as the distances get longer (the next four weeks, Sundays will be 10, 11, 12, and 14 miles).  I had mentioned before that me sticking to the training program was going to be as much an accomplishment as actually running 26.2 miles.  No excuses!

For all the runners, stay safe and healthy.

I mentioned previously that I try to run four times per week.  I know runners who run every day, where it seems like they would be lost if they had to miss a day.  I know others that, when the endorphins kick in, they feel like they could run forever.  Any time those endorphins want to kick in for me, I’m ready for them!  I have never, ever regretted any run I’ve done, and I always feel better after I’m done, glad that I did; however, there are more times than I’d care to admit that it’s a struggle to get motivated.

My running journey started in 2014.  My wife Rayna had been working out at a gym near our home and teaching ballet at a local dance school when she was diagnosed with heart failure. We later found out that she had a rare blood disorder that was affecting her heart and she required chemotherapy and a stem cell transplant. While we are fortunate the treatment put her in remission, the damage it did to her heart was irreversible, and she ended up needing a heart transplant as well.  So, I started running to be healthy for her and for our kids.  I knew I needed to do more than I was doing to ensure sure I’d be around.  She encouraged me to run since she couldn’t.  We were fortunate that on October 8, 2018, she received a new heart and today is doing great.  Six months of living in Salt Lake City as she recovered, and we were back in Casper.

So, I was and am a fan of the show The Biggest Loser.  When The Biggest Loser announced a 5k Run/Walk in Casper August 17, 2014, I signed up.  And a few days before the event, I panicked…what if I couldn’t do it, what if I embarrassed myself, what it, what if, what if.  Then Rayna calmly told me that I could do it, that she believed in me, and I showed up.  And I learned what I really loved about running…. being around other runners.  The atmosphere for that run was more like a carnival and I loved it (maybe some of those endorphins were even released!).  We started at the Boys and Girls Club, ran down along the Platte River, and back again.  I stopped to walk briefly once and finished….and I was hooked!

Since that time I’ve done over forty 5K runs (3.1 miles), a few 10Ks, 15Ks, a 10 mile, and trail runs, plus seven ½ marathons, three of those in Casper, three in Las Vegas (running down Las Vegas Boulevard at night), and one in Salt Lake City.  While there may be easier marathons to run that the Casper Marathon (lower elevation, more of a downhill course), Casper was where I ran my first 5K, and Casper was where I ran my first half marathon back in 2017, so it’s only fitting that Casper and the Casper Marathon is the place I will run my first marathon.

My history with the Casper Marathon even pre-dates my interest in running.  As a Casper Rotarian, I volunteered a few years manning one of the aid stations at Crossroads Park.  I remember watching the runners and wondering if I could do that.  We will see.  My “official” training program starts next Tuesday…wish me luck!

My name is Glenn Januska, I’m 54 years old and I am training for my first marathon.  The Casper Marathon, Sunday, June 7th to be more specific.  There, I said it.  A couple months back when I decided to train to run a marathon, I wasn’t sure I was going to tell anyone.  A part of me thought if I didn’t say anything, I would have an out if things came up that prevented me from completing my training program.  While running 26.2 miles is obviously going to be physically challenging, for me I believe the hardest part is going to be the mental aspect of the training.  I’m good at justifying and talking myself out of doing things I want to do, but maybe not want to do ‘that’ much.  A running friend of mine suggested reading The Non-Runner’s Marathon Trainer.  That book, and the training plan it includes, will be the plan I follow.  The book says the only two things that can keep you from achieving the goal of finishing a marathon is getting injured during training and your attitude.  At 54 years old, I’m not a spring chicken, but I have been running for over 5 years and, knock on wood, have not had any injuries that have kept me from running.  My attitude must be that I can do this, and I’m working on that as much as I’m working on the physical aspects.  So, you now all know that I’m going to run in the marathon, and I’m going to finish.  There’s no going back now!

This blog is going to chronical the journey.  I’m hoping that for those who have trained and run a marathon, it may bring back memories or provoke a laugh.  For those who are training for their first, let’s do this together.  I’m part of two running forms online, Marathon Runners and The I Love to Run Community, and really enjoy following others marathon, half-marathon, or even those running their first 5K (3.1 miles) journeys.  Finally, maybe I can inspire a non-runner to start running, or to get off the couch and walk a block, or run a block, or train for a marathon!  I am the poster child for ‘if I can do it, anyone can do it’.  Up until 5 years ago I didn’t run, had never run, and had no desire to.  I love to hear stories of what has motivated others to run, and I have a very personal reason too, but that’s a story for a different day.

While I try to run 4 times per week, my formal training program begins February 18th. For those in the Casper community you may see me running around, participating in some of the many 5K races we have in town, and of course for those planning on running in the Casper Marathon, whether for the ½ or the full marathon, I’ll see you there.  I’ll be the 55 (then) year old at the finish line! 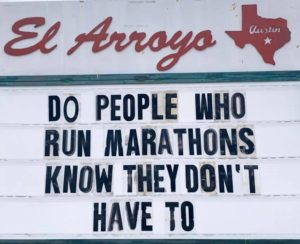